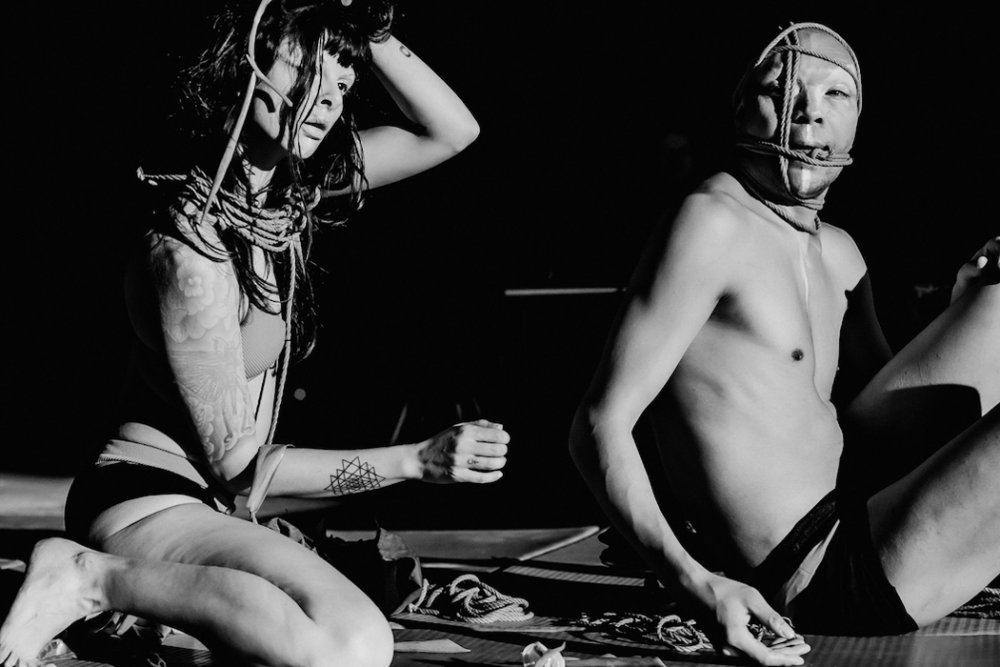 Valentin Tszin is a Russian artist based in Berlin, DE. A pioneer in bringing rave culture, digital art, butoh (anti)dance and physical theatre together. Dozens of performances and movie appearances, European festivals (Atonal Berlin, CTM, Today’s Art, Athens Biennial) and fashion collaborations (Zaha Hadid, Trippen, Obscur); as well as collaborative performances and workshops with the key figures of the international butoh scene (Ko Murobushi, Carlotta Ikeda, Dairakudakan company etc.) made him a recognisable figure on contemporary art scene. Known for his passion for going beyond the stylistic and conceptual frameworks, he sees butoh as a kind of virus: mutating, changing its gene, striving on new territories yet to be discovered.

Butoh artist, working with interconnections of corporeality and language, identities, body parts, brain traces and randomness. Based in Berlin, she has been performing and given workshops in Europe and abroad.

Daniel Williams, Dresden-based Scottish composer, specialises in score and sound-design for dance and theatre. Daniel developed his distinctive “embodied” approach to sound art. After demonstrating it in award-winning production “Ketzal” in 2007, Daniel went further into using contemporary technologies to create a real-time interaction, which some describe as taking the sound straight out of the performer’s body.

Sasha Andjelo, a devoted connoisseur of the sound of retro synthesizers with a classical Russian education in the violin class. Frontman of post-punk/synthwave band Behavior model. As part of the show, it explores the possibilities for going beyond song architecture, replacing literature with other forms of emotional influence.

Rafael Hofman is a genius. For example: he tries to connect pencils and brushes, and trees and brushes with people, thoughts of love and hot air, buildings with stairs and fine farts.

Noah Oskar Nasir likes to stick his nose in a different rabbit hole. Afterwards, he uses some soap to clean the reat of the dope from his nose holes. He is also broke and is always very happy to make a joke. He paints because painting eats photography whole. He waits alone for the extreme to infiltrate his brain, showing the loose screw that still holds. With every blue drop he gets more and more insane and new, to find out he is always the one to blame. It’s the only order he is under, to paint. ‘Don’t lose time, but paint, you fool’. By the guitar she waits with her figure, so as to play a game of blues. Only one… ‘But you know, my beauty, then I have to paint some truth…’ Currently studying at the Academy of fine farts in Vienna.