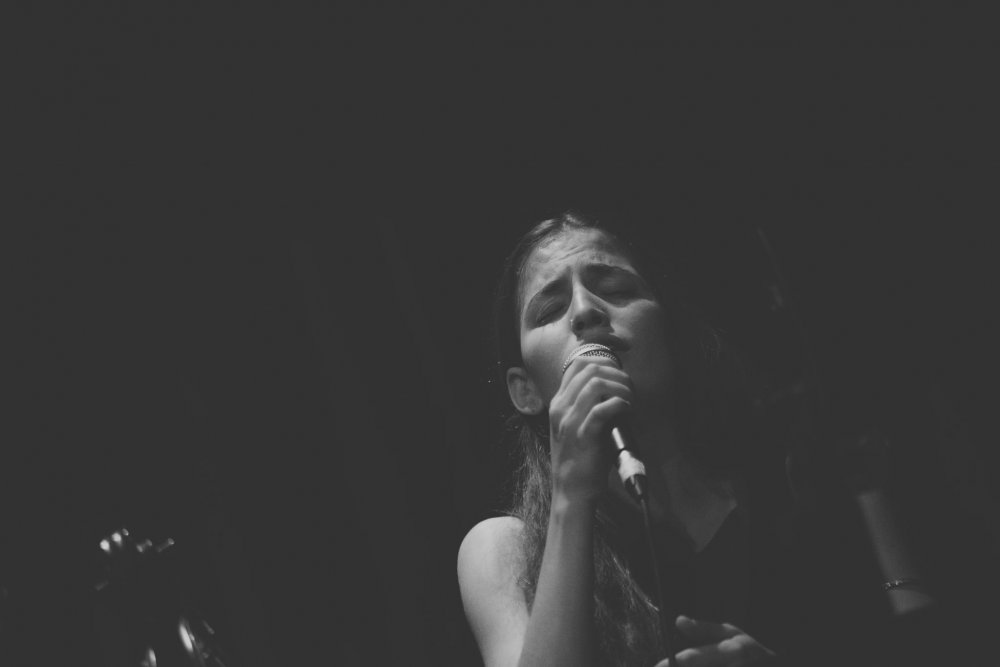 As a curator, he is co-founder of Berlin-based audiovisual label AVERAGE NEGATIVE and host of the LIQUID SOUNDS SERIES - both dedicated to genre-free, creative music.

As a producer and sound designer, Chris has founded the creative agency chhhhhh, which has created campaigns for major brands such as Mercedes Benz, Drive Now, VIU Eyewear, Deutsche Bahn, WIRED.

INÊS PEREIRA born in Braga, Portugal. Works between sound, voice, dance and performance. She has graduated in jazz singing and had ballet and contemporary dance training at Arte Total - Braga, where she now collaborates as a performer and production assistant.

In 2019, she has been working with free improvisation, vocal solo setups and created many projects as vocalist such as d r a f t s, the septet Uniforme and the vocal trio Echo ochE.

She collaborates with the electronic trio Y?li, the soft satanic jazz band Lucifer Pool Party and composed the sonoplasty for the play “Quan-Tos Que-Res” by Anto?nio Dura?es with Arte Total.

Ine?s has also worked with artists such as Demian Cabaud, The Rite of Trio, Rui Horta, Francisca Marques, among others.

JOÃO ALMEIDA  born in Lisbon, Portugal. At the age of 8 he started his musical studies at Banda Filarmónica de Mafra and later at the Escola de Música do Conservatório Nacional. In 2015, João began to study at the Escola de Jazz Luiz-Villas Boas from Hotclube de Portugal and last year finished his bachelor degree at the Lisbon Superior Music School. Works regularly with the Orquestra de Jazz do Hotclube de Portugal and has been in an internacional tour (Serbia, Romania, Hungary, Slovakia, Austria, Czech Republic, and Germany) with the band Farra Fanfarra. He has worked with artists such as Albert Cirera, Rodrigo Amado, Gabriel Ferrandini, João Lopes Pereira, André Fernandes, Pedro Moreira, among others.

His music has been played at Korea, USA, The Netherlands, Austria, Germany, Spain, France, Italy, and, all over Portugal.

As a performer he plays (mostly) electronic instruments that he builds or modifies. Highlight for the projects CACO.MEAL (post-human non-binary techno jazz) and DUO Almeida / Carlos Pinto (experimental electroacoustic).

Goats, chaos epitaph, coming from the basements of Portugal.

Why goats, why? Deep sonic exploration and expanded dialogue. Acoustic and electroacoustic images.

We are not alpacas.