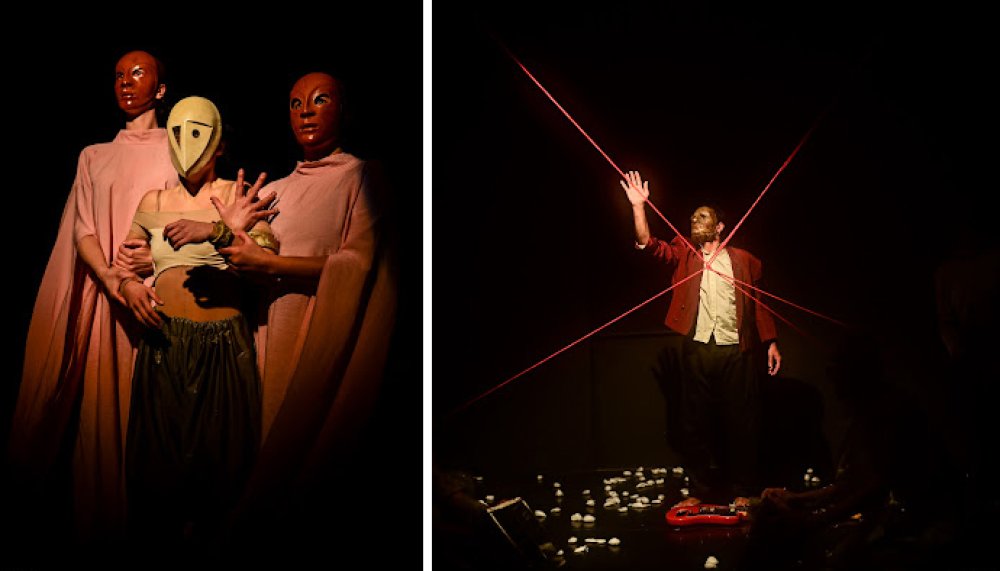 monstrous is an unfashionable offering from long-time theatre practitioner and environmental biotechnologist Daniela Marcozzi and dramaturg/novelist Francesca Sarah Toich, in that it pays unusual attention to theatre tradition, and bothers to involve itself in the creation of a deep and multi-layered dramatic text. The show begins with an abstract presentation of questions that will be answered later: a masked figure undertakes a carefully choreographed dance, followed by a white-masked, bird-like figure, and two pink-robed guardians. The images seem to swim and hover over the air, in a call-and-response formula that will be repeated, making propositions in the abstract that will be answered as the dystopian reality slowly unfolds.

Some questions are answered with the entry of (masked, of course) doctor and nurse figures, who begin to proclaim medical phenomena in direct address to the audience, although in an abrupt and absurd articulation. "I think you will be very delighted with the womb 4849, doctor!" exclaims the over-energised nurse, as the white-masked figure spreads its legs downstage in the Lithotomy position. "Where were you consummated?" asks the doctor. "Prenzlauer Berg", replies the patient. A story of giving birth to a rabbit ensues, before the patient is told that they are privileged to be giving birth to a very endangered species - the White Rhinoceros - and helpfully supplied with a description of its unique biological characteristics. This occurs among occasional pointed references to life "before the regime", and sarcastic gratitude to women for "making their wombs available for the re-population of endangered species".

The Theatre of the Absurd components of monstrous are fascinating in this dystopian scenario, as the text follows a line that echoes Ionesco's Rhinoceros or Dürrenmatt's Die Physiker, blending them with The Handmaid's Tale in an examination of a fantasy ecofascist future. Lines like "We might well die in here, but at least they will treat us with utmost care until death" or "(she was) raised on Vitamin B12 injections and hatred of our species" drip with sarcasm and misanthropy while simultaneously pointing the finger at the treatment of the - specifically female - body under contemporary capitalism and its speculative biological sandboxing. It's a text that would find friends among Achille Mbembe's Necropolitics, Foucault's Biolpolitcs or Federici's Caliban and the Witch - all contemporary readings of the body as a tool of control by political forces. Without knowing dramaturg Francesca Sarah Toich's novel Ad Bestias - on which the play is based - it's difficult to say where this influence begins and ends. But if we assume that the text and world are lifted from there, while masks and choreographic touches added by Marcozzi, then this seems a multidisciplinary, complimentary collaboration that is remarkably successful.

With monstrous, Marcozzi is in perhaps her best territory, as it blends her twin backgrounds as a scientist and theatre director. The ensemble have created here an old-school throwback that nevertheless has contemporary resonances, and is remarkable for its precise layering and political communication. It's something of which the main stages of Berlin seem only capable of dreaming these days, showing a level of attention and care that can happen when independent artists of great capacity get even a small amount of financial resources.